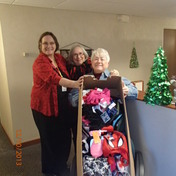 Theresa Shoemaker of Aurora's Communities in School Program received gloves, mittens, hats and scarfs donated by AARTA members at the December luncheon  A total of 106 items were donated. 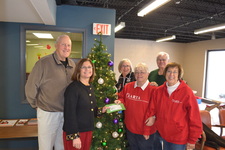 Thursday, December 12, Marilyn Weisner, Executive Director of the Aurora Area Interfaith Food Pantry and John McKee, Board of Director member, received a check from AARTA.  Arlene, Ron, Sue and Meg were given a tour of the newly opened facility.  Our donation from our 50/50 Raffle will be used to help fund the purchase of food items for the Pantry.

The History of the Aurora Area Retired Teachers’ Association

During the 1958-1959 Academic Year, thirteen teachers from both the East and West side districts of Aurora, anticipating retirement at the end of the year, began discussing the idea of organizing a chapter in the National Retired Teachers’ Association.  After electing officers and meeting regularly during the year, they met with the Director of Region 10 of the NRTA, who encouraged them for form what would become The Aurora Area Retired Teachers’ Association, Unit #38, of the Illinois Association of Retired Teachers, and an affiliate of the NRTA.  They agreed on four meetings a year and dues were set at 50 cents a year.  Obtaining a list of 95 retirees living in the Aurora area, they managed to induce 42 to join them.

While organization was relatively easy, keeping members interested and informed proved more difficult.  Finding an affordable place to meet (on the city bus line), coming up with suitable programs for both men and women, financing the organization, and finding retirees willing to “walk the walk” proved a healthy task.

However, these were formidable men and women, and by meeting at no cost at both the YMCA and the YWCA, sponsoring pot lucks, (and selling the leftovers), programming local school talent and highlighting speakers from Aurora College and the business community, they managed the first few years quite well.  By 1961 they had doubled the dues and gotten involved at the area and the state levels of our parent organization; and they now boasted 57 members!

Early on they learned reluctantly that they must become politically active and participated in a successful state-wide movement to “sustain a recently threatened pension raise to our oldest teachers”.  Secretaries’ notes began to carry messages urging members to “write Governor Ogilvie”, and “Don’t forget to call or write Governor Walker,” to better fund and even save pension and insurance systems.  They found themselves bussed to Springfield to participate in Legislative Lobby Days.  They invited local legislators to come and speak before the group to better acquaint the membership of their political positions on educational issues.  They also formed small Advocacy Groups to meet with and locally lobby area legislators.  Carrying on this endeavor, AARTA members continue to be active participants regarding legislative and educational issues.

AARTA has supplied Fox Valley communities with mayors; its members have published text books; some have become namesakes for schools; they have chaired and served on countless civic, educational, and charitable organizations----in fact it would be difficult to find a worthy area organization in which AARTA is not represented.  The group has also shared its responsibility at the Regional, the Area, and the State levels of the Illinois Retired Teachers’ Association serving as Regional Chairs, on State Committees, and working in coordination with Area II Representatives.

AARTA has successfully striven to encourage our younger retirees to become active participants; we sponsor two junior college scholarships annually, publish a top-notch newsletter, plan trips to the city for shows, sporting events and other social outings to promote fellowship along with educational endeavors.  These activities combined with the many benefits offered by IRTA serve as incentives for our growing membership.

In October, 2008 AARTA celebrated its 50th Anniversary.  The Anniversary Celebration motto is “Fifty Years of Serving Retired Teachers in Kane County”.  We are also working to prepare the way for our fellow active teachers, it might better be stated. . . . .”Serving ALL teachers in Kane County”.  So as we gathered to recognize our past members and presidents, let we lifted a glass to those dedicated friends still in the classroom in anticipation of another fifty years.